Why Buy Silver? Reasons to Invest in Silver 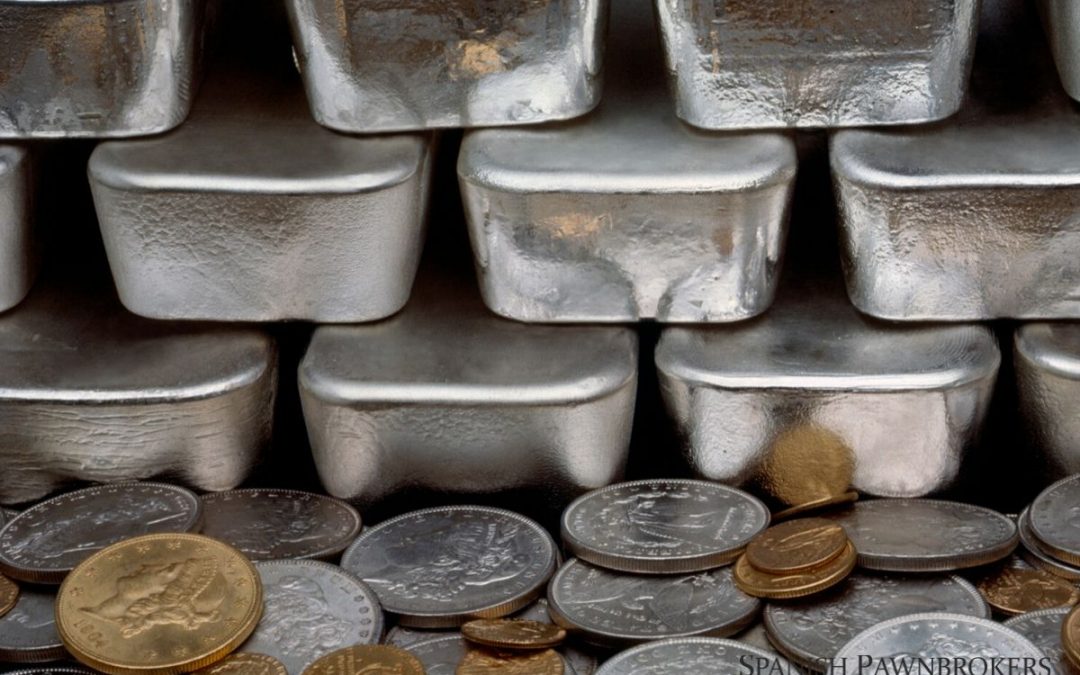 Here at Spanish Pawnbrokers we love silver, it has a rich and fascinating history and we know many of you feel the same. So we would like to dedicate this blog post to you, our valued customers, and friends. We would like to invite you to sit down, grab a cup of tea and learn a little about the unique history of silver, we hope you enjoy it and learn some curious facts you perhaps didn’t know before!

Like gold silver is one of the most widely used metals in industry today due to its unique properties. Silver has been used since ancient times for luxury items, religious artifacts, weapons of war, and jewellery because of its beauty, brilliance, and strength.

Today silver continues to hold great economic and emotional value. It is widely used in decorative pieces for royalty, jewellery, bladed weapons, utensils, ornaments, and it is used extensively in many different industries. Because of its relatively low cost, it is more accessible in many homes.

Silver is a brilliant white precious metal that is very responsive to polishing and is characterised by being ductile, shiny, soft, lustrous, and malleable. Silver is stable in oxygen and water however it tarnishes slowly when exposed to sulfur in the air forming a characteristic black sulfide layer.

Among silver’s most outstanding physical properties are its resistance to corrosive agents, for this reason, it is used in the manufacture of special containers and metal plating. Silver also holds significant importance for its use in photography, and among many other industries. Did you know that approximately 60% of the world’s silver is used in industry?

The name silver derived for the Anglo-Saxon for silver, “seolfor”, which comes from the Germanic “silabar”.
Silver has the chemical symbol Ag which is abbreviated from the Latin word “Argentum”, the Latin word originates from argunas which means shining in Sanskrit. It is located in the periodic table of elements in group 11 with the atomic number of 47.

The origin of silver is a very special one because like gold, all the latest discoveries point towards the theory that silver came to earth via asteroids.

It is a very rare metal in the earth, it can be found natively, combined with sulfur, arsenic, antimony, or chlorine.

It is also obtained from copper, gold, lead, copper-nickel, and lead-zinc mines. The mines of Canada, Mexico, Peru, and the United States are the main silver carriers in the world.

HISTORY OF SILVER IN THE WORLD

Silver is one of the seven oldest metals used by man.

It is a highly valued metal, although it is inferior to gold, it has very unique properties that distinguish it from other metals.

The discovery of silver has made such an impact on history, that subsequent generations thanked God for the gift of silver, believing it to be a gift from heaven. Which ties in beautifully with the latest discoveries that silver may have been quite literally showered down from the heavens encased in asteroids.

The first recorded uses of silver are from the beginning of the ancient civilisations of Mesopotamia and Egypt.

One of the oldest recorded documentation by a civilization dates all the way back to 3500 BC when the first pharaoh Menes wrote the Menes code, where it is stated that one-part gold was equal to two and a half parts silver in value.

It is believed that during the XXXI centuries BC, in the area of Israel and what we now know as Turkey, gold was first separated from silver.

Some ancient civilizations intrinsically linked the brightness of the moon with silver. Artemis the Greek Goddess of the Moon, was described as the Goddess who wore silver sandals and whose bow and arrows were forged from silver.

Just as gold was considered the metal of the sun, silver was believed to be the metal of the moon. Because like the moon, silver is reflective in nature and the colours bear a striking resemblance and brilliance. Silver has long been said to have the ability to mirror ones soul and aid the wearer to live a more spiritual life.

The Bible points out in many passages of the Old Testament that the people of Israel traded silver. It was naturally suited to serve as a religious symbol, its faultless whiteness made it a perfect symbol for purity, leading to the extensive use for all manner of ritual implements and vessels.

Later, the Greeks and Phoenicians were the first to create silver coins for commercial purposes, for personal ornaments, and to create weapons.

During the Roman era in Spain, many gold and silver deposits were discovered within Spain. At that time the exploitation of the land for silver was so extensive that unique landscapes such as Las Médulas in León were created.

Later began the rise of the Spanish Empire, under the reign of King Ferdinando II of Aragon and Queen Elizabeth the Catholic of Castilla in 1469. Who in search of greater wealth and possession of precious metals explored the world and came to the Americas. Here they began to extract metals bringing great wealth and power to the empire. The extraction of precious metals allowed Spain to become one of the most powerful empires of the 16th and 17th centuries and they became known as the “the empire on which the sun never sets”. During this time silver gained greater power as a monetary system.

During the conquests of the Americas, many influential discoveries occurred, including the discovery of silver deposits.

The estuary/river “Río de Plata’s” (which is located between Uruguay and La Plata in Argentina) name comes from the fabled Sierra De Plata or the “silver mountain” that was thought to lie upstream and on the false supposition that it washed a country rich in silver leaving deposits in the water. Many embarked on missions to find the fabled Sierra De Plata, but none were successful.

This leads us to the given name of Argentina in South America, which was named because of the belief that the sea and lands contained an abundance of silver. As you will recall the Latin name for silver is Argentum, so Sebastián Caboto named the land Argentina, a name which remains today.

There were silver mines called the mines of Laurion or Lavrion mines, located approximately 50km south of Athens. These mines were very rich in silver, from these mines the metal extracted was used to make silver coins, which were used for the economic transactions of Athens and contributed significantly to the cities wealth.

After the conquest of the first century BC as a result of the domination of the Roman Empire, silver mining became widespread in Britain.

The “Ruta De La Plata” or silver route in Mexico, was created during the colonial era and its function was to transport silver from the “Royal mines” of Nuestra Señora de Los Zacatecos ( Zacatecas) to Mexico City. Although the road ran from Mexico City to the current territory of New Mexico in the USA, it is almost 3000 kilometers long and contains many important areas including towns, convents, missions, and archaeological areas. Due to its historical importance and significance, the entire route is now listed in the UNESCO world heritage list. 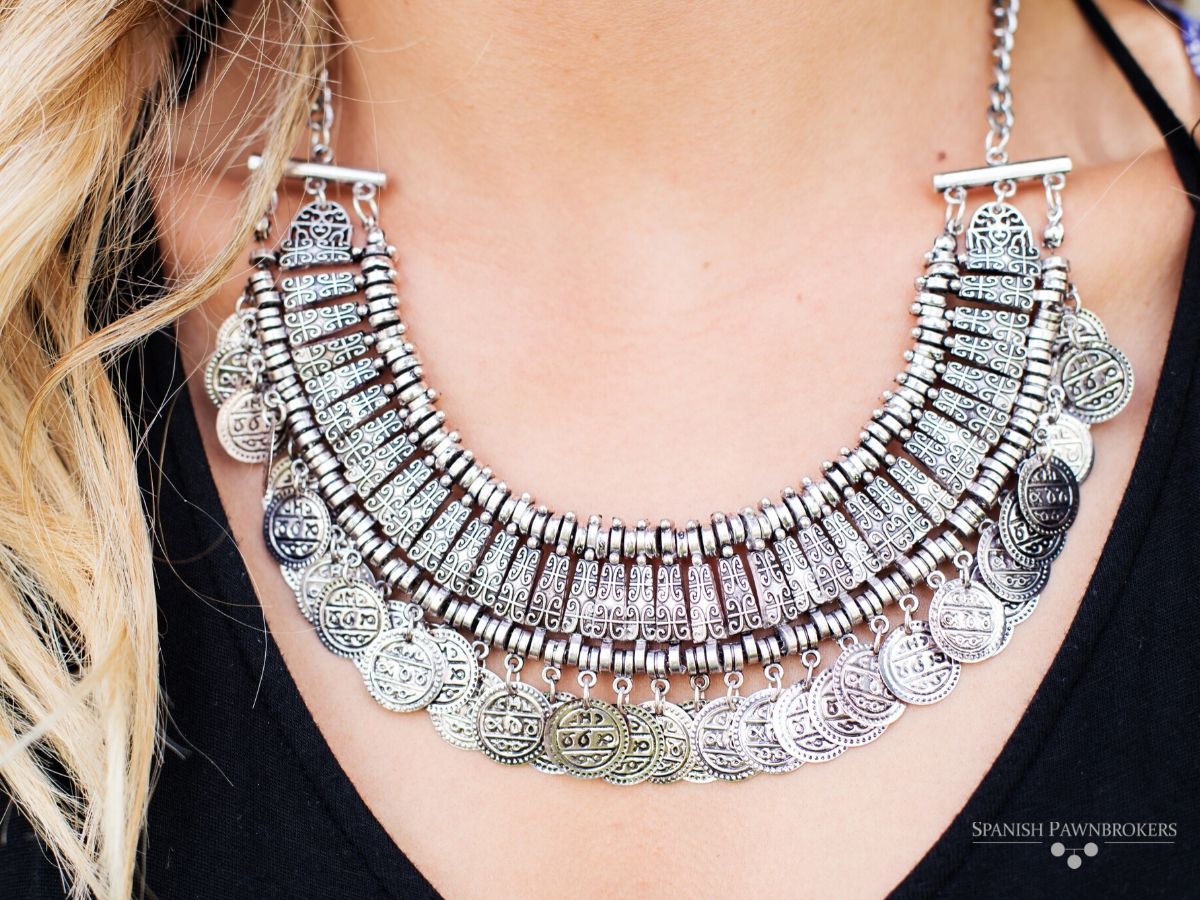 Silver is a highly malleable metal, which has very important characteristics and physical properties in the world of silversmithing.

The malleability of silver allows the manufacture of unique pieces, but its resistance to corrosion makes it attractive and valuable after gold.

In addition, the use of silver jewelry is so popular owing to its characteristic colour which makes it the perfect combination for many fashion accessories such as, rings, earrings, watches, bracelets, chokers, and many more, which can be purchased at a much lower cost than accessories made of gold.

Like gold, silver-loving people place a high sentimental value on their jewellery, which makes silver jewellery special to those who own them. In this way, wearing a piece of silver is important to many because they give the metal a value symbolic of purity, honesty, and uprightness.

WHY SILVER IS SO VALUABLE

Silver’s value is due to many historical, economic, and emotional factors.

Its origin, like gold, sets it apart from many metals, for this reason, it was used to make jewelry for royalty, ornaments, vessels, and ceremonial items in religious sites. Silver is a symbol of sacred feelings and as an indicator of wealth when used as a currency.

In addition, the scarcity of silver and its origin in the earth makes it very precious and increases its value.
For silver lovers, wearing silver jewellery or owning a silver ornament holds special meaning, so do not hesitate to choose it when you want to give a distinctive and unique gift, that will last through the ages to be passed on from generation to generation.

We hope you have enjoyed learning about silver with us. If you would like to add a special piece of silver to your collection, why not come down to see us at Spanish Pawnbrokers, or have a look on our website, we are sure you will find something beautiful that catches your eye and captures your heart.

Are you looking for…?

Looking for something special? 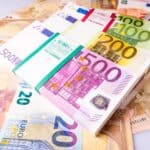 Open chat
We use cookies to ensure that we give you the best experience on our website. If you continue to use this site we will assume that you are happy with it.Ok